If we’re serious about the fight to achieve gender equality, we need to talk about it. Everywhere.

What I’m about to write may sound like a joke.

One-hundred eighty tax geeks (including myself) walk into a “tax and development” conference. It’s summer in Germany, and we have three days to get through a packed agenda.

Now guess what we discuss. The role of taxes in achieving the sustainable development goals? Yes, but nothing related to gender inequality—one of the most important issues in the fight to end poverty. (Unless you count the moment when someone called out an all-male “manel” … I don’t).

Gender is usually an afterthought at convenings where the topic of conversation comes off “technical,” like taxation. But collecting revenue and what you do with it has everything to do with reducing gender disparities in education, care work, and the broader economy. And it’s high time we start making the connection—before it’s too late.

The “tax and development” conference happened this past July. Organized by the Addis Tax Initiative, the purpose was to discuss how developing countries can raise more money to support their own development goals (also known as domestic revenue mobilization) and how donor governments can support those efforts.

The truth is that how governments raise revenue (i.e. who pays?)—and how donors decide to help—can lead to different impacts on the poor and the wealthy, on women and men. If we ignore these dynamics, tax systems can serve to disempower women (or other marginalized groups).

For example: Women carry out the majority of unpaid care work and are more affected by taxes on the goods and services needed to care for children, the elderly, or others (such as food, clothing, and health supplies). For many countries, most of their increased revenues are coming from these types of consumption taxes—while other taxes (e.g. tax on wealth, disproportionately owned by men) are dismissed.

The Canadian government shares a similar perspective. That’s why we decided to work with Canada Global Affairs (their development agency, which released its feminist international assistance policy in 2017) behind the scenes to think of ways to make the conference in Berlin less gender-blind.

We agreed to try something small: a survey, which about one-third of conference participants took. And here’s what we found out about the bunch of tax geeks (men, women and non-binary people) in the room: 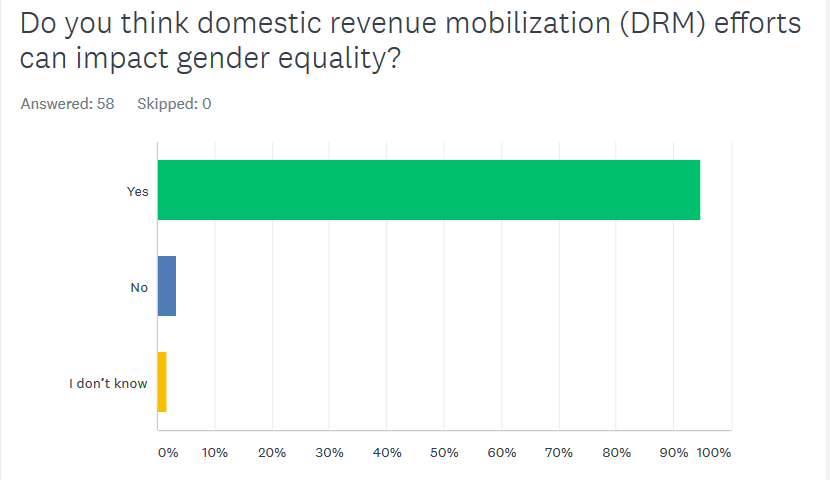 It’s a start. With increasing global commitments to domestic revenue mobilization (DRM) and gender equality (G7 just published its Call to Action), cooperation on “tax and gender” should be increasing. Regrettably, gender equity has been largely neglected. Since 2015, just 1.9 percent of DRM projects have had any focus on gender.

But this can change. In July, Canada reported to the ATI that its new feminist policy “brings opportunities to incorporate a gender perspective in the design and implementation of new tax policy and administration programmes with our partners.” Sweden is equally situated to lead smart cooperation efforts on gender-transformative DRM.

Others should be stepping up as well. The US, for example, passed the Women’s Entrepreneurship and Women’s Empowerment (WEEE) Act in January 2019—mandating that gender analysis be integrated into all USAID projects. As current co-chair of the Addis Tax Initiative, the US should be supporting country-led DRM efforts that improve a tax system’s impact on women, women-owned businesses, and the costs of care work. Our survey respondents also saw practical opportunities for collaboration. 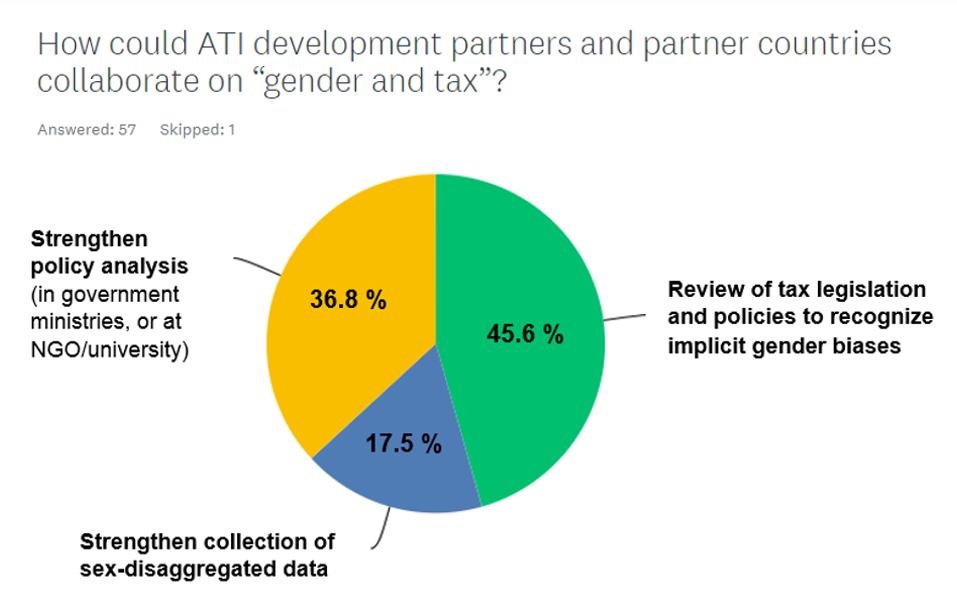 Time to step up

Whoever steps up must work in partnership with local Women’s Rights Organizations (WROs). According to our survey, only 15 percent of respondents said they were engaging with WROs—a troubling finding.

Making the tax system more equitable requires a strong understanding of culture, economic behaviors and power dynamics embedded in a society. WROs and gender rights organizations are critical sources for such knowledge and analysis – such as African Women’s Development and Communication Network (FEMNET) and the Global Alliance for Tax Justice.

Donor governments are committed to collectively spend at least $440 million on DRM each year by 2020. The money is there. The public rhetoric is there. It’s time for governments to step up, and for donors to make smart investments with their dollars to fight gender inequality.

View the full survey and the results here. 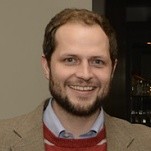 Nathan Coplin is a Policy Advisor for Accountable Development Finance at Oxfam America.