While movie stars and Members of Congress are blowing the whistle on high-profile perpetrators of sexual harassment and abuse, millions of women in low-wage jobs watch and wait. Afraid of what could happen – from job loss to deportation to threats on their lives – they feel compelled to deal with the assaults privately, despite the toll on safety and dignity.

The sudden flares going up in the sky about sexual harassment are illuminating a grim landscape below, where men wield power and privilege to take advantage of women and girls (and men and boys). Every day, more instances come to light: from Hollywood to the halls of Congress to leading media offices.

These cases become news, and rightly so. And the hashtag #MeToo illustrated, in a hot wave, just how far and deep the harassment goes. This river – of unwanted touches, words, pressures – runs under nearly every woman’s experience of the world. It thrums when we walk past a line of construction workers having lunch, it beats loudly when we walk alone at night, it pings when we choose the wrong seat on the train.

However, we need to remember that the women who bear the worst brunt are rarely the ones who call out the most notorious offenders. For every woman who speaks out, there are thousands more who feel the same pinch of harassment – but also suffocating pressure to remain silent.

These are women who genuinely have little power, and little prerogative. They’re single parents, scrabbling to support families on threadbare paychecks. They’re immigrants, terrified of losing jobs which sustain relatives in the US and back home –unsure of their rights and unable to locate help.

Oxfam focuses a special lens on women at work: especially women in low-wage jobs, women of color, immigrant women. These women show enormous grace in dealing with grinding pressures, including the constant drip of sexual innuendo and pressure. We’ve been honored to get to know some of them, and to carry their stories into the light.

While women across all occupations are exposed to abuse, some workforces face extra risks. Factors at work include the nature of “women’s work,” demographics (age, education, language, immigration status), geography, and more. And let’s not forget that wages for jobs seen as “women’s work” run lower than wages for those considered “men’s work”. Poverty and fear of losing a job are powerful deterrents to resisting and reporting harassment.

Personal dynamics: The pressure to be agreeable

“Service” occupations are dominated by women, who are traditionally characterized as more nurturing, caring – and subservient. Then you add the element of “performing”: when service jobs don’t pay a full wage, workers “earn” the rest of their wage by providing good service. This dynamic pressures women to be accommodating to customers, and to ignore violations to avoid losing compensation. And it piles on the layer of “selling” – not just service, but physical attractiveness. 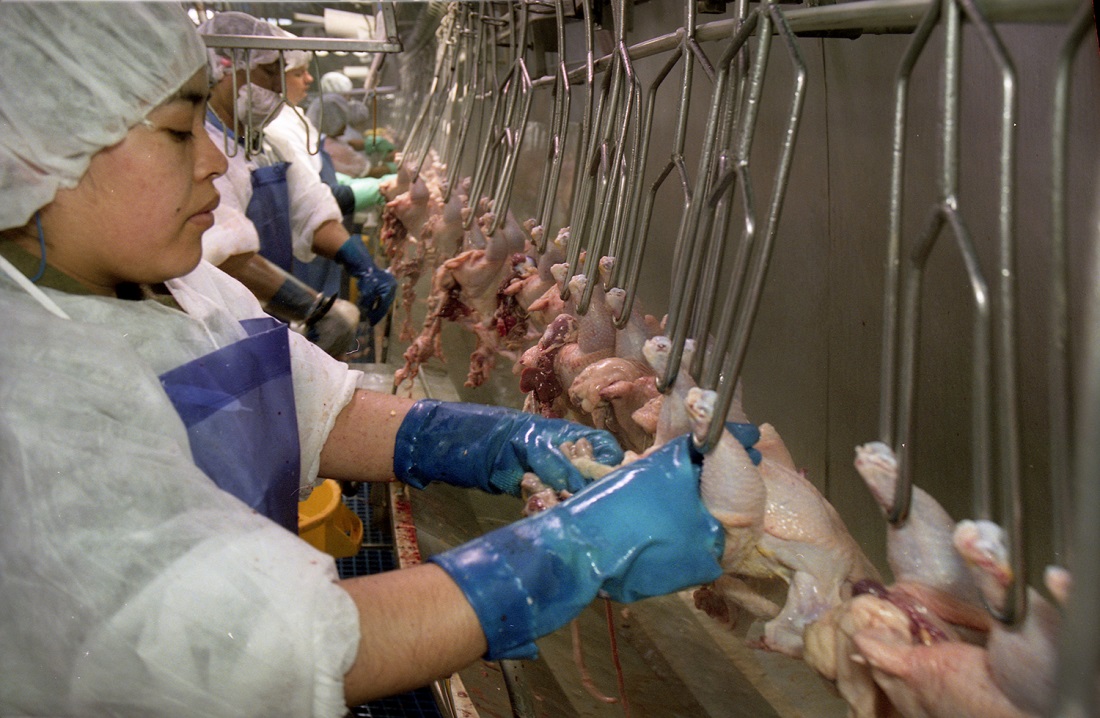 The geography of risk

Another occupation where low-income women are highly vulnerable is agriculture. It’s not exposure to the elements that compels most women farmworkers to cover up with layers of clothing (bandanas, hats, long sleeves); it’s exposure to the attention of men in the field.

Women farmworkers face particular conditions that make them vulnerable, and the result is staggering: one community study found approximately 80 percent of women farmworkers experienced some form of sexual violence on the job (vs. roughly 25-50 percent of all working women nationwide).

Some of the factors at work:

Many of the most arduous and low-paying jobs are primarily occupied by immigrants or refugees. The vulnerability to risk and the barriers to reporting are high.

In the poultry industry:

Some hope on the horizon

Despite the overwhelming odds, some workers and organizations are empowering women, and men, to take action.

The Equitable Food Initiative (incubated by Oxfam for years before it spun off as independent) includes very strong training and guidelines in its qualifications for certified farms. Their definition is comprehensive and sensitive:

“Sexual harassment includes any insult or inappropriate remark, joke, insinuation, or comments on a person’s dress, physique, age, or family situation; a condescending or paternalistic attitude, with sexual implications undermining dignity; any unwelcome invitation or request, implicit or explicit, whether or not accompanied by threats, any lascivious look or other gesture associated with sexuality; and any unnecessary physical contact, such as touching, caressing, or pinching.”

And recently, the Lawyers’ Committee for Civil Rights and Economic Justice announced a sexual harassment lawsuit against a prominent restaurant chain on behalf of five Latina kitchen workers, signaling that these workers have legal rights. These are steps in the right direction, but still far too many women are working in fear.