Conflict, climate change, and inequality are making it harder for families to share a meal around a table.

Monday was a sad day. That’s when we got news that more than 820 million people around the world don’t have enough nutritious food to thrive.

That’s horrifying. But even more alarming is the fact that the number of hungry people has risen for a third consecutive year after decades of progress.

This isn’t how it’s supposed to be. The world committed just a few years ago that we would end hunger by 2030. It’s right there in the UN’s Sustainable Development Goals (SDGs)—Goal 2: Zero hunger. No one thought it would be easy, but we thought it was possible.

So what exactly is going on?

For decades, global hunger had been receding in the modern world. There have been bumps and blips along the way. But a disturbing new trend seems be taking hold, setting us back almost a decade. 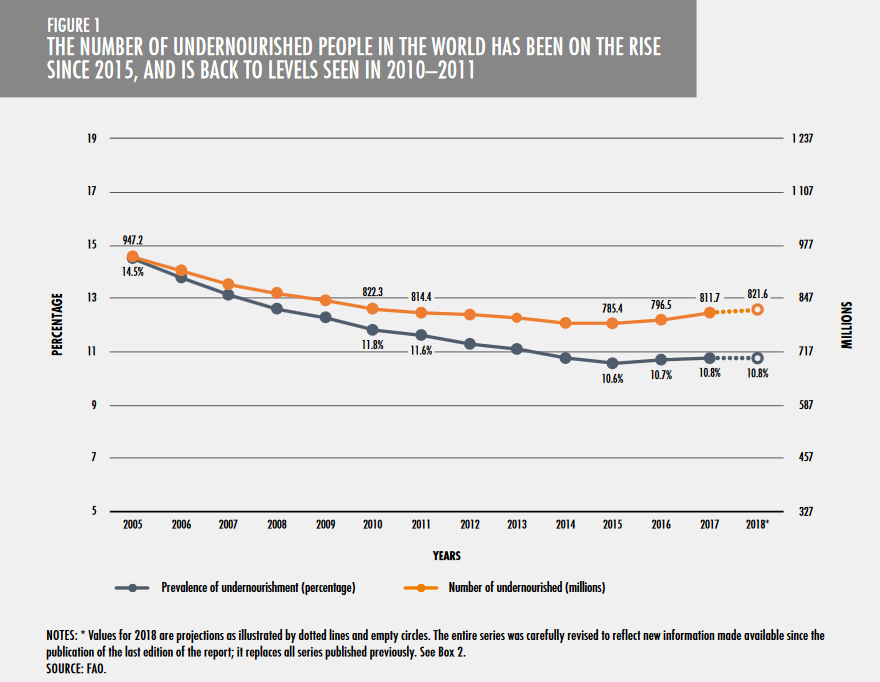 There is no single reason that hunger is rising: protracted conflict, climate change, and worsening income inequality all play a role. But it’s worth noting that more familiar culprits are less prevalent—high food prices and a global economic slowdown. That should be worrying, because if hunger is going up when food prices are not high and the global economy is relatively good, what would happen if that changes?

Oxfam recently looked back at the most recent global food crisis from 2007-8 to see what has changed and what lessons we have learned that help clarify why such levels of hunger persist. We looked especially for how the crisis affected women.

Here’s what we found: When food prices skyrocketed around the world, poor people and poor countries suffered. Women were particularly vulnerable to the shocks, with fewer resources and options to respond. They skip meals, feed their kids first, buy cheaper and less nutritious food. Women farmers also have a hard time taking advantage of higher food prices because they often can’t get access to credit, high quality farm inputs, and have more constraints on their time and mobility.

Why did prices rise? No single cause, but we noted a host of contributors: More food was used to make biofuels; insufficient stockpiles of food commodities in case of heightened demand; a few extreme weather events; trade interruptions; financial speculation; and a general neglect of agriculture, slowing farmer productivity.

So what has been done over the last 10 years to prevent food shocks and reduce hunger? Not enough unfortunately.

International aid for agriculture development has rebounded modestly from historic lows. There has been a plethora of initiatives, conferences, task forces and summits. A new fund, the Global Agriculture Food Security Program, was created. Thanks to vital UN emergency response and safety net programs that have improved and expanded, famines have been avoided in places like Ethiopia and Syria.

But still, the overall picture remains grim. Governments in some of the hungriest places continue to ignore the problem and under-invest in solutions. Women are still not getting access to the resources they need to protect the food security of their families and their communities. The global food system still feels too vulnerable to shocks and disruptions. And there’s also a very complicated, crowded “ecosystem” around hunger, nutrition and agriculture: from UN agencies like the Food & Agriculture Organization to the World Bank to US government agencies to philanthropic organizations like the Gates and Rockefeller Foundations, not to mention dozens of other institutions, non-profits, and organizations at every level.

Funding, programs, and leadership are spread among them. Responsibility is shared and diffuse. There’s little real accountability.

The final wake up call?

So whose job is it to end hunger? Since every country endorsed the SDGs, you could say it’s everyone’s job. But saying that means it’s no one’s job, really.

No one is getting fired for the bad numbers that were announced on Monday. No agency is facing budget cuts as a result. No company is facing a shareholder uprising due to rising hunger.

I still believe Zero Hunger is possible. There’s plenty of food in the world. But the truth remains that we’re nearly one-third of the way to the 15-year deadline and we need to reverse course desperately.

Monday’s news was sad, but it barely made the newspapers. But anyone who cares about the world should take notice.