Each year, we mark gender pay gaps in the calendar. In 2021, August 3rd marks Black Women’s Equal Pay Day, when we note that Black women are paid 63 cents for every dollar paid to white men. Given that Black women do vital jobs, support families, and participate in the labor force in greater proportion than other women, what is going on?

“There’s a lot of miles on this body,” says Ms. Dorothy, who has been a server at a restaurant in Jackson, Mississippi, for 43 years. She downplays the grit, grace, and steel that has sustained her family and community for generations, but she has been a vital support for her son, grandson, and great grandson—at one point working 60 hours a week while raising a family and going to college.

And for all that hard work? She still earns the tipped wage of $2.13 an hour (plus tips; employers are required to ensure that her actual pay meets the hourly minimum of $7.25). This is a poverty wage. When the COVID-19 pandemic first raged through Mississippi last spring and the restaurant closed, she had no cushion.

“Many of us are always one paycheck away from being evicted, being in the street, not having food,” she says. “I have no money saved. I don’t know if I’ll be able to pay my bills. I’m just hoping and praying.”

Like millions of people, she gathered her wits and resources to face the lean months ahead: “I spent my last couple dollars trying to get stuff we’ll need. I just put by some rice, pasta, bread, and froze a gallon of milk.”

But why is Ms. Dorothy—a woman who excels at and enjoys her work—teetering on the precipice of economic freefall? Why are millions of Black women earning paltry wages for work that runs the country’s economic engine?

How did we get here?

The answers are complex, of course, and not easy. The US economy has deep roots in structural racism and sexism on many levels.

Black women have had the highest levels of labor market participation since the US started counting—regardless of age, marital status, or presence of children at home.

And that participation is crucial to Black households: as of 2020, nearly 75% of Black mothers with children under 18 are key breadwinners for their families, compared to 45% of white mothers.

“Black families often rely on more than one generation to work and contribute to household finances,” says Joi Owens, Oxfam’s Program Lead in the Gulf Coast. “When one person loses a job, it shakes up the whole family structure.”

Moreover, for centuries discriminatory public policies have reinforced the view of Black women as workers rather than as mothers. As the Economic Policy Institute reports, up until the 1960s, caseworkers excluded most poor Black women from receiving cash assistance because they expected Black women to be employed—not stay-at-home moms like white women. 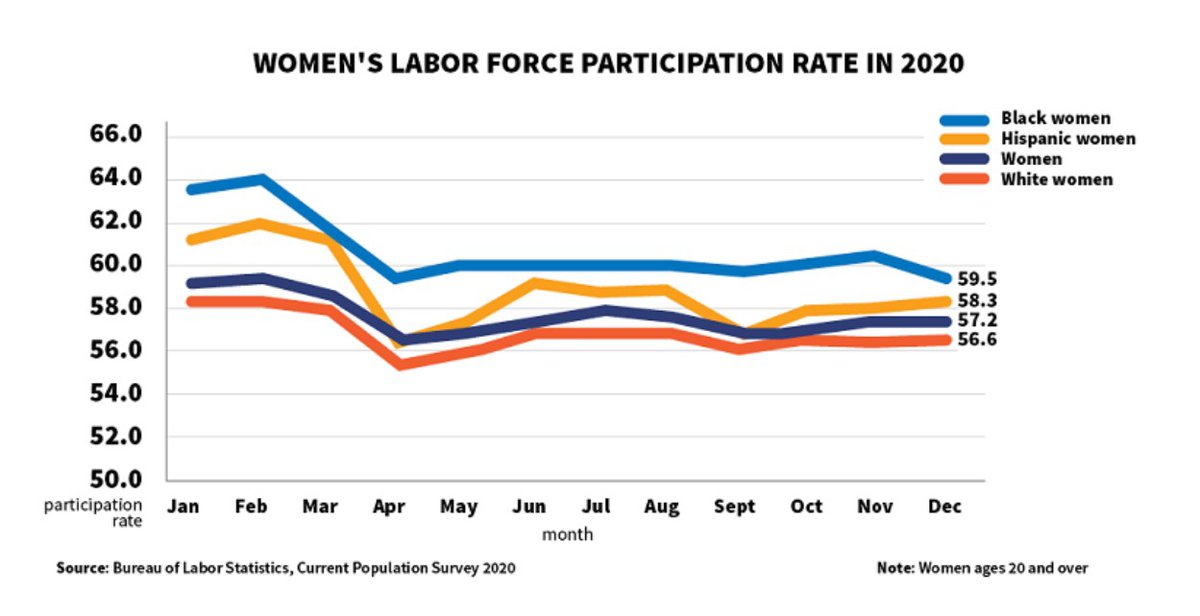 Black women are more likely to be in jobs that pay less.

Gender segregation of the workforce in the US is profound, and women are concentrated in jobs that pay lower wages. Occupations that can be characterized as “women’s work”—cleaning, cooking, childcare—usually offer few rewards and paths to advancement. Even jobs that may require an advanced degree (such as early childhood educator) may pay less than jobs considered “men’s work” (such as security guard). (For more on the gendered labor market, see Oxfam’s Undervalued and Underpaid.)

Add to that layers of systemic racism that have funneled Black women into low-wage service jobs. Today, 28 percent of Black women are employed in service jobs—vs 20 percent of white women—and they tend to be concentrated in the jobs that offer the lowest pay and sparsest benefits.

State labor laws have created a patchwork of inequality.

Labor laws and policies play a huge role in setting the floor on wages, and in securing rights and protections in the workplace. State laws across the country vary dramatically, and working families face wildly disparate conditions.

As a result, in these states a disproportionate number of Black women are paid very low wages and face the greatest pay gaps. The map below illustrates the percentages of Black women in each state who earn under $15. The dark blue indicates more than half; in several states it tops 60 percent.

The state that has the highest percentage of Black residents—Mississippi—falls near the bottom of the state index and is the only state in the country without an equal pay law. Oxfam participates in a coalition that introduces this legislation every year.

Joi Owens, who partners in the Gulf Coast with the Mississippi Women’s Economic Security Initiative, says that the equal pay law is central to the effort not only to raise women’s pay, but to educate and galvanize Black women to take action. The Initiative encourages Black women to run for office, and to organize against voter suppression. 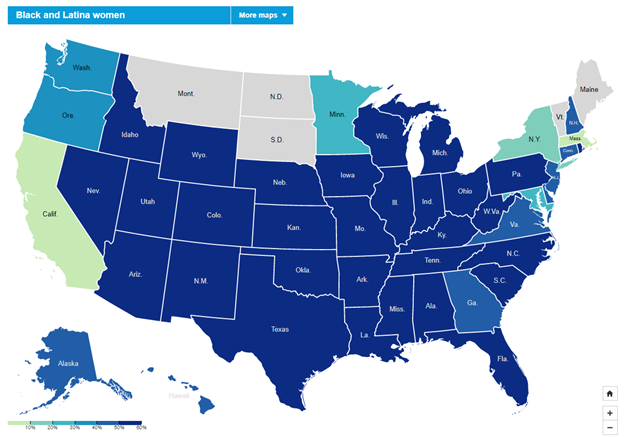 The dark blue on this map indicates states where more than half of Black and Latina women earn under $15 an hour. (Oxfam map)

When the federal minimum wage does not rise, it depresses the wage floor, and impacts Black women workers. It’s been stuck for 12 years.

The wage has been $7.25 an hour ($290 a week) for over a decade; in that time, all costs of living have climbed. Black women are disproportionately represented in low- and minimum-wage jobs.

A bump to $15 would immediately decrease the pay gap by gender and race, lift millions of families out of poverty, reduce hunger and food insecurity, and strengthen our economy. (For more on the impact of the minimum wage, see Oxfam’s interactive map.)

The tipped work force is disproportionately Black and brown women; and the subminimum wage has been $2.13 an hour for 30 years.

The first minimum wage law excluded restaurant workers; when the tipped wage was created in 1966, it formalized the idea of the “subminimum,” and created a dangerous dynamic for servers.

Before the pandemic, Black women restaurant workers earned on average nearly $5 an hour less than white male counterparts. This reflects both the fact that they are segregated into more casual restaurants, as well as customer bias in tipping.

Millions of workers are excluded from federal labor protections

When federal labor laws were passed (especially the NLRA and FLSA in the 1930s), they deliberately excluded certain workforces--especially farmworkers and domestic workers—in large part to get support from Southern lawmakers. Not surprisingly, most of these workers were and are people of color; and a substantial number are Black women.

On top (and as a result) of all these realities is the fact that when economic crises strike, Black women often feel the sharpest blow.

Half a million Black women lost their jobs in 2020, according to the Department of Labor; by percentage, the losses were nearly double those of white women and men over the same period.

Moreover, Black women who kept their jobs are overrepresented in frontline occupations that are experiencing the greatest dangers of exposure to the virus (such as cashiers, teachers, cleaners, healthcare aides).

It took ten years for Black women to recover from the Great Recession in terms of employment; now, they are practically back to where they started when the bottom dropped out of our economy.

Ms. Dorothy has spent a lifetime working while raising her family. The pandemic exposed the precarity she’s known about all along: “It’s a guessing game every day.”

It is clear that our current systems discriminate against millions of Americans, and that when a crisis hits, the historically marginalized face the greatest impacts. We must use this moment as an opportunity to work toward systemic change and reverse the disproportionate impacts of COVID on women and communities of color, because everyone deserves the opportunity to thrive, not just survive.

You can make a change by demanding that Congress commit to economic recovery that addresses systemic inequality.

For more on what Congress can do right now to address racial justice, see Oxfam’s blog.

Sign your name and demand that President Biden and Congress commit to economic recovery that addresses systemic inequality.